The first riders are in Lapland. Our eyes on the road have found Mikko, Matthias and Janne.

It isn’t easy. We have three new scratches, due to getting sick. Pedro and the pair Kimmo & Jyrki are heading home.

A tough decision to make but sometimes you just need to do it. Wether you finish or not, you’ve had an adventure. Chapeau for getting out there.

It’s not easy for the ones still continuing too, but there’s always something to enjoy too and better to focus on that, if nothing is actually wrong. You get good exercise:

You get to ride your bike and eat pastries.

Ride your bike in the middle of the road with no-one to bother you.

The winter is coming.

I just got a new winter cycling cap. Woollen earflaps and all. Also, the wind has turned. Gone are the days of warm(ish) southwesterly breeze. The gusts from the north are here.

While there might have been one or two negative tweets about the weather from our riders on the road, the wind has been favourable. Until now. It is blowing from the north from now on. Usually, especially during the warm months, in the southern Finland, the wind blows from the south west. In the fall, the warmth often ends with a weather front that brings a northern wind. That seems to be happening right now again, the summer is gone. And the further north you get, the more likely it is to have a wind from the Arctic Ocean and the colder it gets.

The weather has led another to find his achilles heel. Eemeli Huhta will be heading home.

After a couple of rainy days, even the ones usually prefering to stay outdoors, seek shelter. The towns offering accomodation are sparse, so many are going to end up in the same places for the night, like Janne Villikka and Mikko Kainu. Some get there earlier, others arrive later. Sleeping only a few hours would be enough, but staying a bit longer is attractive, to dry your gear and wait for the sun to come up. Maybe eat a good hotel breakfast.

There is no mandatory or otherwise obvious route between the start and finish of the control 2. The first point is on the top of Kivesvaara (sounds bad, I hope you’re all safe out there) and the second point is in Poukio. You can either take a short detour on paved roads, east or west, or head straight on the shorter unpredictable gravel road. Janne Villikka chose the asphalt while Mikko Kainu was adventurous enough for the gravel.

The tracker isn’t updating everyones location too often. Mathias Müller is somewhere up there close to the riders furthest up north, though his dot hasn’t been updated for almost two days. There has been some other gaps with data too, so be patient.

The second day of Ruska has passed. The challenges start to ad up and riders get in to their rhythm. During the first night, most stayed on their bikes, except for the ferry ride, and last night was the first to actually find a place to sleep. Some found better spots than others, but anything goes when you’re tired enough.

Weather has been wet, even though the sun has been peeking behind the clouds.

The harsh conditions together with the terrain at the end of the route of the first control finishing to Oravivuori, has taken it’s toll on the equipment, eating the brake pads of at least two riders, Matti Jutila and Pompo Stenberg, and a gear cable of the latter.

Most seem to favor the western option passing the lake Päijänne, gaining a flatter route. A few have taken the road on the east coast too, enjoying a nice small country road with lots of small hills and the slightly bigger and to some extent famous Vaarunvuori.

Matti Ainasoja is now the lanterne rouge, after going around the Gulf of Finland via Russia, and has just passed the first point of the control 1.

Ruska isn’t an easy task, and we already have the first two who have had to throw in the towel. Antti Ahde was battling with knee pain and Esa Salonen had missed the part of the first control and was too far to turn back.

The fastest riders are on their way up north along the rather big road number four, Janne Villikkaand Mikko Kainu being the two furthest up. The next ones, led by Mikko Mäkipää, have chosen to take smaller roads and might find a slightly shorter route to the control 2. Right now the views are mostly wet darkness for both options, but we’ll see what tomorrow brings. For the next day the temperature is expected to be between 6-10 °C with a bit of headwind. The rain should stop at noon, which would provide nice views from the control 2 on the top of Kivesvaara.

This year’s edition of Ruska – The ride across Finland began yesterday at 19:40, at sunset. The start time has been the same for both of the previous editions of Ruska too, but the route changes every time, while keeping the idea of riding across the length of Finland. 18 riders will be adventuring their way across Finland, starting from Tartu in Estonia, to Hammerfest on the northern coast of Norway. The riders will choose their own route, but they do have to pass through three controls and follow a set of associated mandatory bits of route, the parcours. The start, the controls and the finish are all located along the Struve Geodetic Arc.

It was raining right though the first night, forcing some to find rubber gloves and whatnot to stay comfortable. While statistically the amount of rain is higher during the warmer summer months, the latter half of September can be damp. There will be some rain here and there, and with the cooler temperature the roads won’t dry quickly. But with luck, there can be close to optimal long distance cycling weather, as it doesn’t make you sweat and drink as much.

The first obstacle, the Gulf of Finland

As the ferry from Tallinn to Helsinki is allowed, that is the most obvious route to use. There is several ferries during the day, so missing one of them isn’t a problem. There are none during the night though, so even for the fastest riders riding through the night, the morning ferries would be the target. The distance from Tartu to Tallinn with the parcours is a bit over 200 km.

As you are free to choose your route though, and it is not a race, you might want to do something different than the optimal choice too, if you are confident you’ll make it to Hammerfest in the time limit. That is what Matti Ainasoja did, opting to go around the Gulf of Finland, via Russia. This will be a longer route and doesn’t give the opportunity to rest for the couple of hours in the ferry. But he does get to ride his bike more.

Many of the riders live in Helsinki, so riding through the familiar streets obeying the event rules and during the first day of the adventure into unknown will be a strange experience for them.

The first riders have now reached the start of the control 1 in Porlammi. From there they will have to ride north to another point that marks the end of the control 1. They have two parcours to choose from to get there, one on the east side of the lake Päijänne, the other on the west side. The western side is mostly flatter than the road along the east coast, but the parcours should make sure they are about equal.

Janne Villikka is not visible on tracker, at least yet, but as we have eyes everywhere, we know he was first to find himself at the control 1. He was in Ruska last year too, but had to cut the ride short, so he might have some unfinished business with the challenge. Very soon after him came Mathias Müller, then Mikko Kainu, followed by Esa Salonen and others. Weather seems quite nice, though there is some small rain clouds here and there.

Krisse and Matti have been cheering the riders on at the first control and took pictures. Thanks for that. 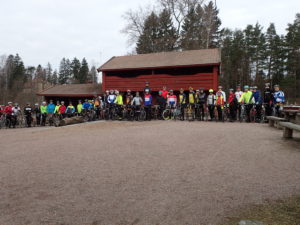