Here we go again. New year, new Transcontinental race route and a few changes in the kit. If you are here then you probably have already read 2016, 2015 and 2014 versions. I’ll refer to them every now and then. I mainly write these to remember what worked and what didn’t. Also to remember what to pack.

A big surprise. A new frame! A long story short. My Orbea Onix road bikes bottom bracket shell was broken and frame was replaced under warrantry. Hence I got a new Avant frame and had the excuse to switch to compact cranks and medium cage rear derailleur that are better fit for long distances than standard road gearings. I probably would’ve ridden with my Onix earlier, but Campagnolo compact cranks for bottom bracket that is not a pile of garbage (Power/Ultra torque) are very hard to find and now that the frame anyways had a pile of garbage bottom bracket shell (a PF86) I chose Ultegra compacts. SON deluxe front dynamo, Power tap G3 and Continental 25 mm tires. Almost all parts, except brakes and bags, are now identical to my last year’s setting. Riding position is a few centimeters more upright so I might spend more time on aerobars. 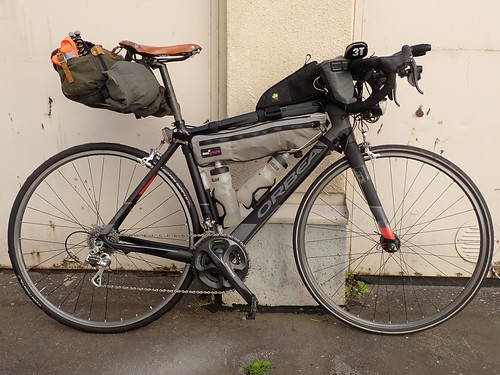 Fear of the dark is still here. Pretty much like last year. Iq-x turned back to Luxos B because bike just looks better with 2 identical lights. Lupine Piko R is still there. It was also replaced under warrantry after last year’s torrential rain in Austria soaked the old one.

GoPro Session is still there. There hasn’t been any reason to upgrade. I now have a helmet mount with KlickFix adapter so I might take a few more helmet videos. 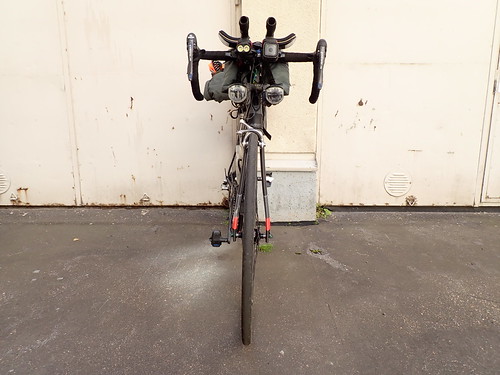 Makeshift mount for dynamo Secula light in the rear and Solas to blind anything or anyone looking at me from behind.

As there are no rack mounts in the frame I use a bit lighter and smaller Carradice bag. Also heavy tools were moved to new more spacious frame bag. Also Alpkit pouch is still under the saddle. 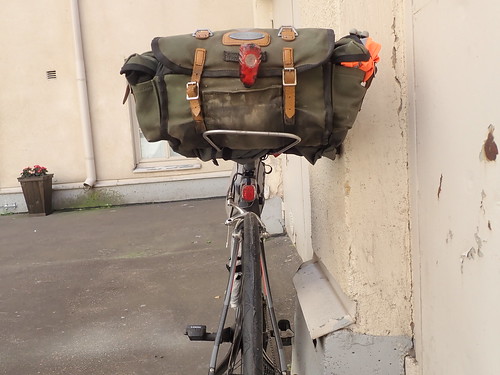 I got new frame bags that were better fit for new frame. Missgrape frame and top tube bags have proven to be ok. Frame bag is big enough for tools and chargers. I was a bit vary of zipper in top tube bag, but I’ve gotten used to it. It is much better fit than my old Xtreme top tube bag. 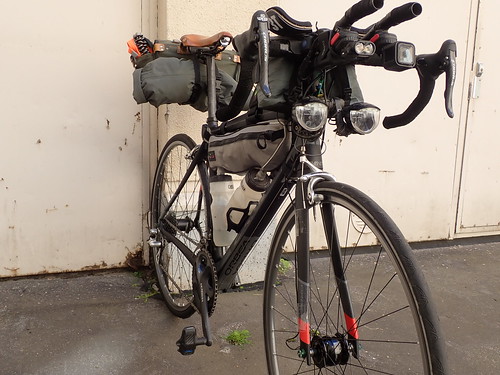 I added Apidura food pouches to dashboard. Old Tunturi frame is a bit too small for the food pouches. I’ll be using Edge 1000 and Edge 820 for navigation. Polar V800 shall be the main recorder now that they finally got power saving gps mode that lasts almost a day with one charge. I just hope their sync isn’t buggy when there is poor cellular coverage. I’ve never recorded all days of a Transcontinental race (4) so far. We’ll see how it goes this time. 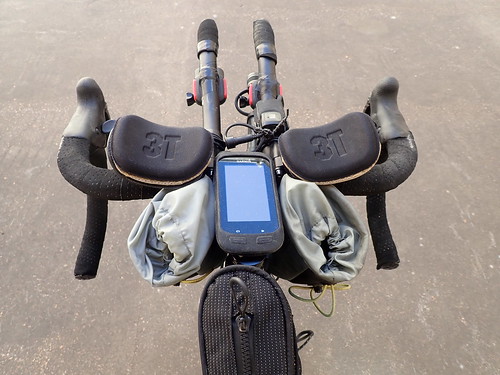 I had to move Piko light and Edge remotes after fitting the food pouches. Remotes are now index finger operated and easier to access from aero position. Initially they seem to work really well, but I don’t know how it goes after hands and wrists are worn out. 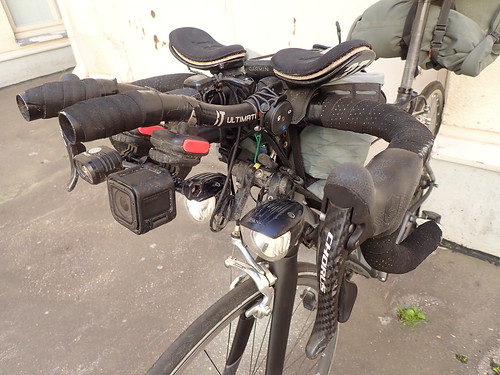 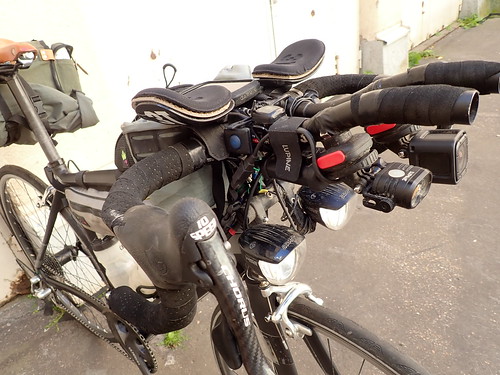 I’ll be wearing mostly the same kit as last year. S-works shoe laces are now serviced so I hopefully don’t have to buy a new pair of shoes 5 hours before start. Randonneurs Finland jersey is identical to Prologi’s that I used last year. Cimacoppi merino long sleeve jersey is good for all weather. Same old shorts, socks and helmet. New, but identical, gloves and hopefully a new cap. 🙂 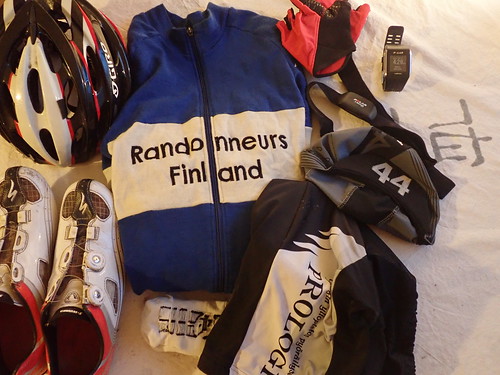 Stuff in pockets are Sony Compact X phone and wallet on left, mussette on middle and camera on right. I try to carry only light objects in merino jersey’s pockets nowadays. Also passport, and later brevet card, in zipper pocket. Camera in photo is the old TG-3. I’m using Olympus TG-5 this year. 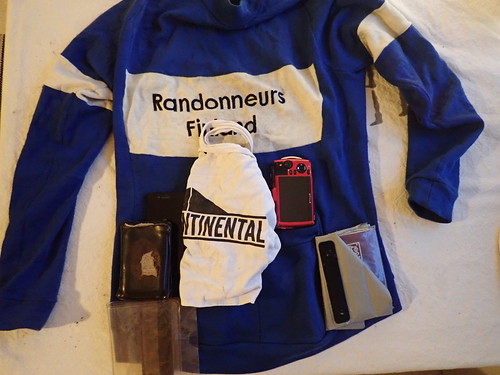 In the saddle bag I have rest of the clothes. I used to have them in frame bag, but I try to keep saddle bag light so I put clothes there instead. A bit slower to take out and no access while riding, but after putting my Randonneurs Finland jacket I can stuff everything in my pockets so I shouldn’t need to access the bag more than once per night. 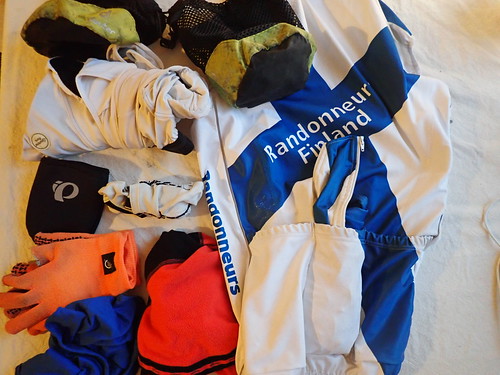 Some neccessities include toothbrush and toothpaste, razor and deodorant. A small rag for cleaning hands and few pieces of toilet paper. Shampoo is used to was both me and my clothes. I try to switch shorts once per day and hopefully find place to wash the other pair sometime during the day. These are in the saddle bag. 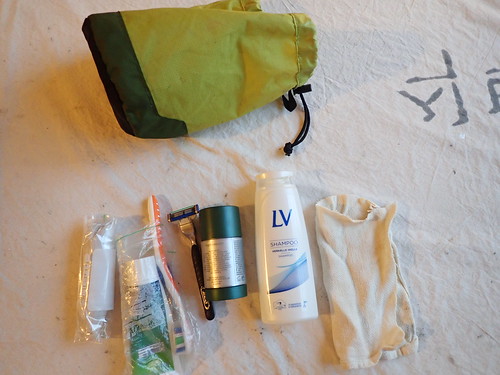 In the frame bag I have a waterproof pouch for chargers. The batteries are here just for show as they are wherever they are needed at the time. Topeak mobile power, Tespack power bank and 2nd Lupine battery. 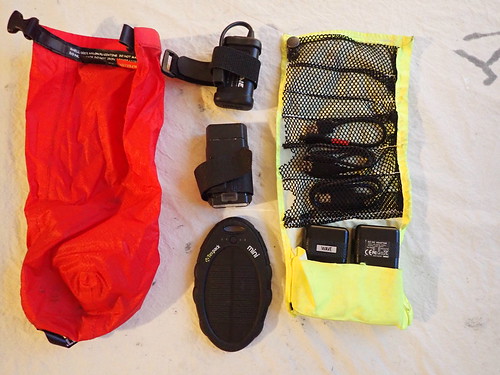 Also in frame bag are the ”emergency items”. 2 power bar gels for food and a space blanket. Also a 2nd phone. I used both phones equally last year, but this year I try to keep one juiced up and have the other just for emergencies. Some small-but-priceless bits include a sim adapter for micro to nano, sd card with maps, usb micro-to-c adapter and usb-c to usb adapter. This last adapter is only way I can move maps and routes to Edge 820 in case Edge 1000 fails. Ridiculous, but thats the way shit works nowadays. 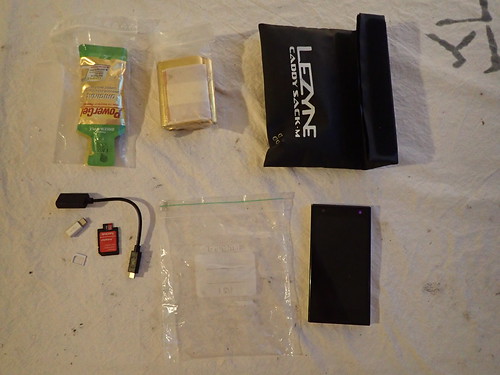 Tools are pretty much like last year. They are in the frame bag. Main difference is that I only have one pump, my other Lezyne pump is broken beyond repair I suppose, but instead I have a replacement hose and a 2nd auto-presta adapter.

I don’t yet have a derailleur hanger, but I’m trying to find one before start. 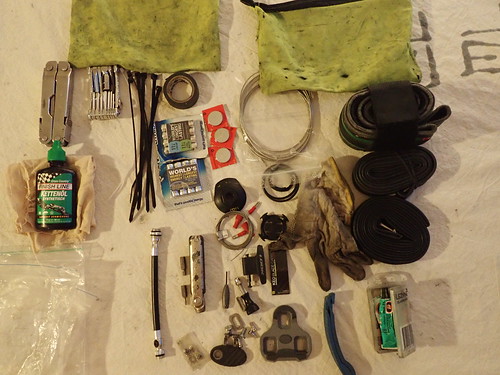 Spokes are inside the saddlebag. 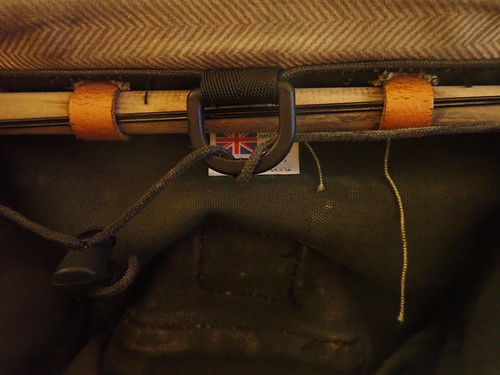 In the other food pouch I have handsfree, headset and spork. Handsfree bag can also be used for cleaning glasses and camera lenses. 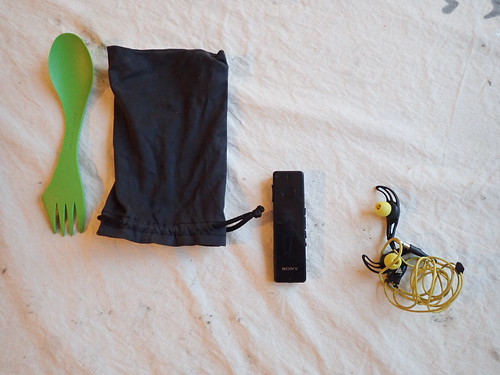 The other food pouch is for cables and bits needed while cycling. Having access to these and keeping track of what is where is one of my biggest mental burdens while riding. Especially not losing the Luxos U usb cable. 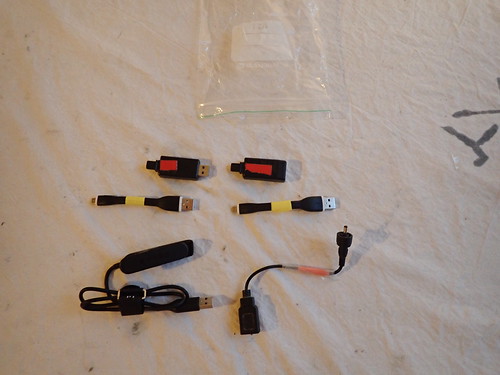 Then there is the Alpkit bag under the saddle that has bubble wrap matress for sleeping and a bag for casual shorts to be used during hotel stops. 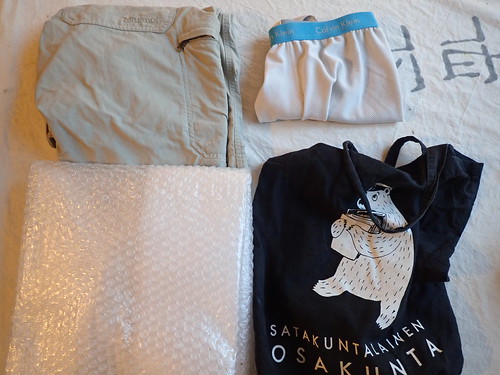 In the right side pocket of saddle bag are Mavic reflective vest. A friend sold me his almost unused vest, because he converted to Rapha after buying it. Vizion vest is by far the best in the category that I’ve ever used. Small details make a big difference when you wear it day after day. Also a package bag to carry food during long nights without known services. Finally a Gorilla pod for photography. 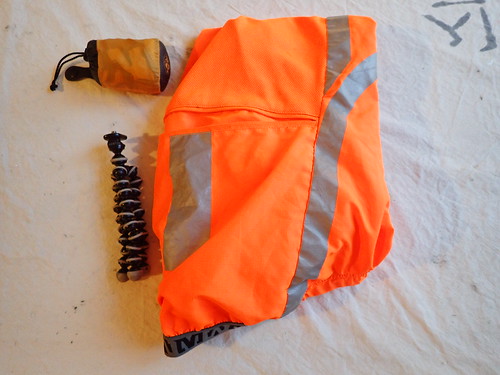 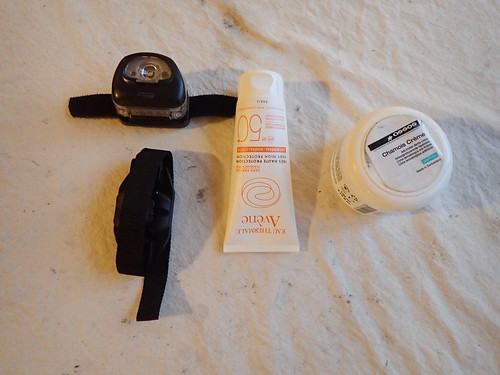